DIFFUGAT - Diploid Inbreds For Fixation and Unreduced GAmetes for Tetraploidy

This project is part of SusCrop, an ERA-NET action funded by Horizon 2020 - the EU framework programme for research and innovation. National Funding Authorities fund each partner in their respective countries. See the partner page for details.

This project will impact the sustainability and resilience of the world’s 4th most important food crop by developing all of the components required for an innovative breeding system that can overcome limitations of the current potato breeding programmes. We live in challenging times, where climate change is set to impact global potato production radically. High temperature, flooding, drought, and salinity will impact yield. Climate change may result in shorter life cycles and increased geographical range for pests and pathogens that can devastate the potato crop. Breeding better varieties will offer the crop an innate capacity to resist these challenges.

Currently, potato breeding is a slow and frustrating activity. Tetraploidy and outbreeding hinder the fixation of genetic gains in potato, making the accumulation of multiple beneficial trait alleles very difficult, even over several cycles of selection. Therefore, we propose a new breeding system called Fixation-Restitution Breeding, which allows for a predictable accumulation and fixation of biotic and abiotic resistances with yield, quality, and nutritional traits. Fixation-Restitution Breeding will facilitate breeding companies to develop highly performing potato varieties with a sustainability and resilience profile that is impossible to achieve using current methods.

Conventional potato breeding takes place at the tetraploid level, to exploit the yield advantage conferred by the naturally larger cells of tetraploids. In the highly successful inbreeding system used in diploid crops, the genetic gain is driven by the accumulation and subsequent fixation of beneficial alleles over multiple recurrent breeding cycles. Potato is normally an outbreeding crop that is intolerant to inbreeding and mostly self-incompatible (SI) at the diploid level. Inbreeding potato at the tetraploid level results in the loss of vigour and fertility after few generations of selfing, making it impossible to practice recurrent selection efficiently, resulting in poor fixation of beneficial alleles and a high genetic load due to masking of deleterious alleles. Traditional potato breeding is based on segregating gametes from meiosis. Even when superior parents are combined, different specific combinations of beneficial alleles, initially accumulated in the elite parents, disperse in the progeny. As a result, the identification of an improved variety becomes a “numbers game,” where huge populations are screened to find varieties which, by chance, perform better than the parental pool in some, but generally not all, characteristics.

Given that at least 40 traits are important in potato breeding, such an approach is far from optimal. A recently proposed alternative, F1 hybrid breeding, is a paradigm shift in the genetic approach of breeding potatoes. The use of self-compatible (SC) and inbred-tolerant potato diploids allows the incremental accumulation of beneficial alleles via rapid backcrossing schemes. Diploid potato is a strict outbreeder due to gametophytic SI. Rare mutants lack this self-pollen arrest and are SC. In the end, highly inbred parental genotypes are hybridized to generate uniform F1 botanical seed as propagating material, and any residual inbreeding depression is dealt with by exploiting the effect of heterosis. However, initiating F1 hybrid breeding in potato is an enormously expensive endeavour and out of the reach of most potato breeding companies. We propose Fixation - Restitution Breeding as an innovative potato breeding system where similar to F1 hybrid breeding, self-compatible diploids are used to accumulate favourable alleles via rapid backcrossing schemes. However, these lines are subsequently used to rapidly transfer and fix the traits into tetraploid breeding populations by virtue of the ability to produce unreduced diploid pollen, producing viable tetraploids when used in 4x X 2x crosses. Fixation-Restitution Breeding will also allow efficient recurrent selection to be harnessed in potato but will be more feasible to implement than F1 hybrid breeding for most potato breeders.

We have identified six components that are required to enable Fixation Restitution Breeding. The six components are: 1. Self-compatible diploid germplasm and genetic markers to generate it. 2. 2n pollen-forming diploid germplasm and genetic markers to generate it. 3. A rapid, cost-effective, multi-allelic, genome-wide marker system to simultaneously enable rapid selection for homozygosity, MAS for key introgression targets, as well as serving as the foundation for prediction of agronomic performance in genomics-assisted breeding programmes, such as Genomic Selection. 4. Germplasm in which beneficial alleles are stacked in the cis configuration on the same chromatid, allowing their simultaneous transfer in a single 4x-2x cross 5. Diploid “ideotype specific clones” for different market segments, equipped with SC, 2n pollen formation, and key trait alleles. 6. A data management and decision support system that acts as a repository for information and enables its efficient exploitation in the post-project phase

DIFFUGAT partners will develop all of these components over the lifespan of the project. An overview of how the components fit together and how they will be deployed to create varieties after the project is illustrated below. 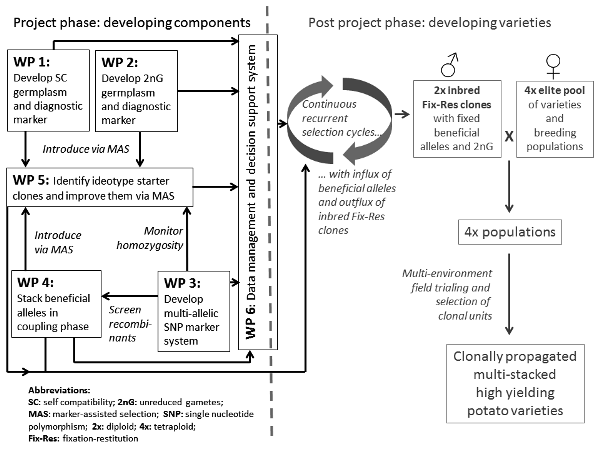